Last year on the UNLV Law Blog I presented statistics concerning copyright litigation in the U.S. District Court for the District of Nevada (here and here); this year I will look at patents and patent litigation in Nevada.

In 2012 the attention on copyright litigation in Nevada arose from a series of copyright infringement cases filed by Righthaven LLC; this year patent protection is the subject of a nationwide public debate as a result of the culmination of the problems with “patent trolls” – entities, sometimes referred to as “non-practicing entities” or “patent assertion entities,” whose predatory patent enforcement practices have burdened U.S. businesses for a number of years (see the June 2013 White House Report “Patent Assertion and U.S. Innovation” here).

The U.S. patent system also deserves attention this year for two other reasons: First, in March the long-discussed reform of the U.S. patent system became fully operational; among other changes, the reform changed the system of priority so that a patent is now granted to the inventor who first files a patent application in the U.S. Patent Office (previously, the first inventor would be granted a patent). Second, statistics suggest the beginning of a new era in which U.S. inventive activity will be exposed to increased competition from other countries. In both 2011 and 2012, for the first time in U.S. history, more U.S. patents were granted in single calendar years on applications of non-U.S. inventors than on applications of U.S. inventors (based on the first inventor listed on an application; see the USPTO statistics here). 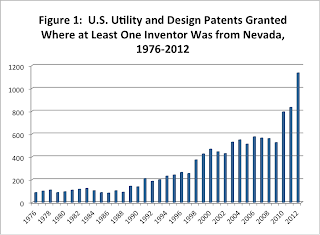 The steep growth in the absolute numbers of patents granted for inventions by Nevada inventors and on applications by Nevada assignees implies a dramatically increased need for legal services in Nevada in the area of patent law. Graduates of the William S. Boyd School of Law are among the practitioners who provide such services in Nevada, and among the many talented students who enroll in Boyd are numerous prospective patent practitioners. In addition to students interested in transactional and litigation work in the intellectual property area, Boyd also has students interested in patent prosecution work – in the last five years Boyd enrolled five to eight students each year with engineering or science bachelor degrees that will likely make the students eligible to sit for the Patent Bar (the USPTO Examination for Registration to Practice in Patent Cases); some of the students have taken the Patent Bar during their law studies at Boyd. The engineering and science undergraduate majors represented among Boyd students in the past five years have been, for example, civil engineering, mechanical engineering, electrical engineering, computer engineering, chemistry, and biology. There have also been Boyd students with engineering and science graduate degrees; for example a doctorate in mechanical engineering and a doctorate in toxicology.

My next blog will place the Nevada patent statistics in a nationwide context by comparing national numbers to the numbers of utility and design patents granted for inventions by Nevada inventors or on applications by Nevada assignees.

Original Article Can Be Found Here

Top Three Most Overlooked Steps to Scale Your Startup

The Startups Who Were Timed Just Right

The Single, Biggest Reason a Startup Succeeds or Fails